The National flower of Zimbabwe is a Flame lily. Flame lily is a unique flower and is native from Asia to the South Africa. This beautiful flower is not only known for its rare beauty but also for one of its trait i.e: poison. Native people blame this beautiful flower for so many sudden deaths and Africans also used it to poison dogs and also use it for abortion. 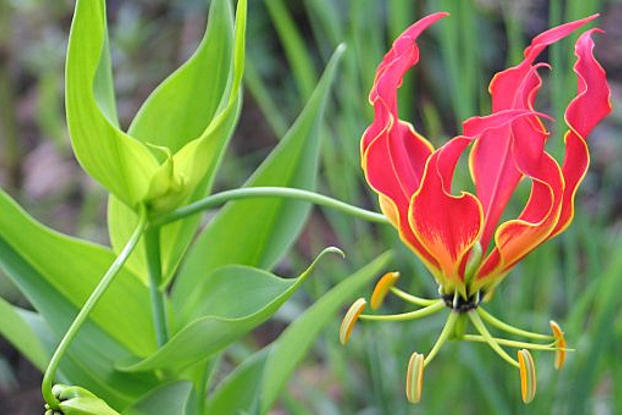 Flame lily belongs to Colchicaceae with Gloriosa as a genus. It is diamond shaped with showy petals found in red and yellowish color mostly. The interesting fact about it is that Flame lily is extremely toxic and Africans and Indians are using this in medications. In India this flower is found in Tamil Nadu it is called naabhi in traditional language, and it is also the state flower of Tamil Nadu. This flower contains Colchicine (naturally occur toxic product) especially the roots and seeds. However, traditional people of Zimbabwe and India are using this Gloriosa (Flame lily) also for committing suicide. It was abundant in Zimbabwe but in recent time, Gloriosa has lost its abundance due to illegal cultivation.

Why is Flame Lily the national flower of Zimbabwe ?

Flame lily as its genus name represents its real meaning, Gloriosa comes from the Latin language which means in glorious and superb, it describes the artist who avails his every opportunity despite the fact of being busy or troubling with hardship. Its meaning exhibits some really hard trails in real life that are why it is picked as The National flower of Zimbabwe.

Orchid: The National Flower of Kenya