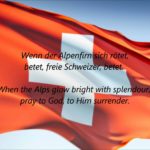 The national anthem of Switzerland is Swiss Psalm. The composition was first seen in 1841. After 1981 it was adopted as the national anthem of the country. While during 2014 an official public vote competition was organized to change the anthem. Schweizerpsalm: Swiss National Anthem: Trittst im Morgenrot daher, Seh ich dich im Strahlenmeer, Dich, du […]