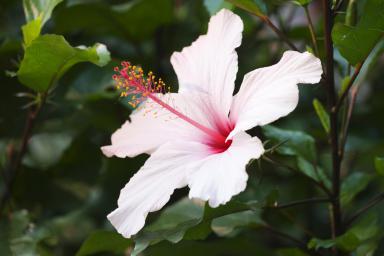 Hibiscus syriacus belongs to Malvaceae family and Hibiscus as the genus. It is found mostly in Asia and have many names which include Rose of Sharon (in north-America), Rosemallow ( in United kingdom), and St joseph’s rod ( in Italy). It is a Vase-shaped flowering part with the hardy shrub that can grow 2m to 4m in height, it is available in selective colors, they are usually in pink, dark pink that looks like purple sometimes light pink or white. It bloom in summer, from June to October and require a medium amount of water. They possess showy flowers with about 5 petals and shaded with usually light pink color at the center and anther between it. They are not only loved by the native people but they also have the ability to attract butterflies.

Why  Hibiscus syriacus is the national flower of South-Korea?